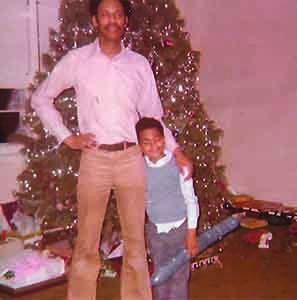 I remember it was a beautiful summer afternoon in the burbs of Carriage Run, New Castle, DE. My adult neighbors on my street are all working on their lawns, tinkering with their cars, and the sound of kids playing in the street is the soundtrack in the background. I’m too young to reach the bars on the lawnmower. I know this because my dad is cutting the grass instead of me, so I’m going to guess that I’m around 8 or 9 years old. There is a white family of 7 who lives diagonally to my house across the street. This family consists of a mother and father with 3 teenage girls and 2 younger boys. The boys were some of the first friends I made in the neighborhood when we moved in from Forest Hills apartments in 1976 and we are neighborly with them at this point.

So, my dad is cutting the grass and of course, I’m right underneath him -as usual- soaking up any time I can spend with him. All of a sudden I hear a loud BOOM!  It is the sound of a front door and screen door flying open and two girls screaming and fist fighting on their front lawn. It’s 2 of the 3 teenage girls that live across the street.  “Dad! Dad! They’re fighting!” I say as I point to the fiasco going on in our neighborhood. My dad releases the handle on the lawnmower and runs over in the direction of the fight and, as usual, I’m right behind him. By this time all the neighbors have stopped doing what they’re doing (white and black) and run in the same direction. I remember distinctly Mr. Jackson and Mr. Poke, who are both middle-aged black men, closing in to break up the fight as well.  My young father, regrettably, gets there first.

It is ugly! Hair is being pulled, cursing, all the things a little boy only sees in the movies are happening right in front of my eyes. I have to be honest- this is exciting! By now my dad is right there to help.  He is trying to break up the fight but they’re not stopping! Cursing, punching and clawing at each other! As my dad and one of our other neighbors (a white man) reach down to pull the girls apart for a second time, the girl my dad is trying to separate looks right up at my dad- in what seems to me like slow motion -says “GET YOUR HANDS OFF ME! NIGGER”!

FOR AS LONG AS I LIVE I WILL NEVER FORGET THE LOOK ON MY DADS FACE AND WHAT HE SAID AFTER HER IGNORANCE.

My dad calmly releases the ignorant teenager’s shoulders and says “Let’s go, son!”  I have absolutely no idea what this word means at this point in my life and say “But dad they’re still fighting!?” My dad, like only my dad, can do, says “I SAID LETS GO SON”!!  That means for me to move and pick up the pace!

As we walk across the street my dad is silent, but before he cranks up the lawnmower to finish cutting the grass he says this to me: “Aki, there are good and bad people in this world. It’s up to you to find and surround yourself with the good ones”.

My dad never uses a racial slur in return during this time, like so many people (understandably) may have, because my father didn’t want me to be bitter. Of course later that night he explains the word to me, the history of the word and why he left the scene of the fight so abruptly. He’s always a class act.

I must add, be fair, that someone must have made the teenage girl come over and apologize to my dad the next afternoon. My dad accepted and I’m his witness… A little boy changed. This is my story.  Now, what’s yours?